First Harvest of the Season! 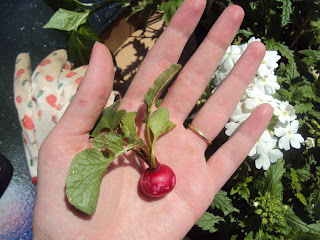 Here in Hico, West Virginia, we'll need to wait another 3 weeks, or around May 28th before the last projected frost date - the earliest date that the WV gardener can expect to plant most any kind of flower or veggie with confidence. But nonetheless - today we didn't only have fun inspecting green little leaves in our garden squares - we actually made our very first harvest of the season - and it's only May 9th!

Even without the use of a cold frame, the humble radish can be grown in your garden as early as the first week of April. And it's so fast growing, you can treat yourself to a harvest in as early as five weeks.

When my ever-positive better half suggested we grow radishes for the simple reason that we were both itching to get something in the ground, I admit - I made a face. We've never grown them before and my experience with radishes has been limited to the dried up tasteless slivers in cheap bags of "rabbit food" salad in low-brow grocery stores or worse, cafeterias.

But, after some consideration, I decided that the radishes would be harvested before most veggies could even be planted anyway. So, I reasoned, we might as well plant something since the dirt would just be sitting there all the same.

On April 4th, Reed mixed together half a handful of Early Scarlet Globe Radish with some carrot seeds. (The carrot seeds help you to space the radishes). We watered them daily...a couple weeks ago we weeded out the weakest of the radishes. And today, we harvested them!

First I should say, the name is nothing less than completely fitting. These tiny bright radishes pop right out of the soil as a bright red orb. The snow white flesh is crisp and crunchy (nothing like bendy, flaky bag radish!) The flavor was similarly surprising (isn't it amazing that with modern food production - it can take 26 years to find out what common foods really taste like?) Make no mistake though, the radish does have an earthy flavor. So, if you're not a veggie nut in the first place, you might not like them. But the flavor is both cold and hot, spicy and refreshing and in two words - not bad! We threw them in our pasta salad and I found my dear husband (who's idea it was to grow them in the first place) allowing me to have the lion's share.

To tell you the truth, these past few days I've not been my chipper self. (Perhaps why you haven't seen many blogs recently). I don't like to think of it as representative of my true nature, but as of late I've been feeling hopeless, disappointed...and not a little tempermental. But it's funny how something as simple as pulling the season's first veggie out of the ground can make one realize that hey, maybe there are some things in life that we can see from beginning to end, and what's more - that thing may be better than we expected.
Posted by WVGardenGal at 5:02 PM